About six weeks after I moved to Santiago with one of my faves, we took on our first big adventure: skiing.  Now, allow me to explain that I grew up all the way at the southern end of Florida, about a hop, skip, and a jump away from Cuba.  Therefore, skiing has never seemed very accessible or feasible to me.  I can probably count on one hand the amount of times I have seen snow.  Sand and water are much more familiar to me.  And kinder.

This skiing thing seemed incredibly scary and death-defying.  Flying down a mountain covered in snow with two skinny sticks on your feet and two skinnier sticks in your hands?  At least three layers of clothing?  My face will be burned even though it’s 20 degrees outside?  I need to wear sunglasses although there is no sun?  It all seemed a bit far fetched compared to the beach towels and large umbrellas that I am used to.  There was a simpler way to have fun and enjoy a resort: you throw on a bathing suit, lay on the beach and order a daiquiri.  This whole “bundle up and fly” idea was not entirely appealing.  However, my father always told me to try things at least once, so here was my at least once with skiing.

My roommate/bestie/all-around-awesome-person had been skiing before and she reassured me that this would be a fun experience that we would remember for the rest of our lives, etc. etc. etc. Because I trust her and believe her with all my heart, I halfway adopted the notion that this adventure might not be so bad.  Maybe I wouldn’t break a leg after all. Maybe, just maybe, I would enjoy the freedom of the slopes.  Or at least that was what I tried to tell myself. 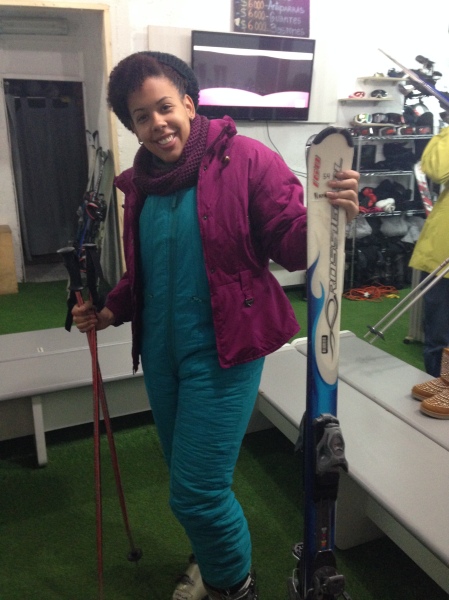 Instead of focusing on the absolute lack of control I would have while skiing, I did what any reasonable person would do: I went shopping.  Here in Santiago there is the wonderful Calle Bandera (Bandera Street) lined with thrift store after thrift store.  Bestie and I spent one full Saturday perusing the stores for cheap ski clothes.  Of course there were other items that landed in our bags along the way; but in the end, we went home with semi-new ski outfits.  My fuchsia ski jacket was 13,600CLP (about $21) and my teal ski overalls were 10,000CLP ($18).  Renting the clothes would have cost about 22,000CLP ($36) and we could not choose the cute colors we got so I felt good about our purchases.  Plus, we are headed to Patagonia soon so we need the gear!

After finding the perfect ski outfits, we booked a package with SkiCentral that included the equipment rental, ski class, and transportation from our apartment to the mountain. A cushy shuttle van picked us up right in front of our apartment promptly at 6:45 am where we were the first of about 12 people to take this ride to El Colorado.  After all the pickups, I fell asleep and by the time I woke up around 9:30 am, we were at the mountain.  The driver took us directly to the equipment rental site where all of our items were waiting for us.  Pro tip: use the restroom before putting on your ski boots.  Those things are not easy to put on or walk in.

After fighting a harrowing battle with the ski boots, we were taken to our ski lessons which started at 11 am.  Our ski instructor was the wonderful Mark from Switzerland.  Yes, Switzerland.  The same Switzerland whose residents receive mini-skis at birth.  Mark put us through the ringer.  The class was supposed to be an hour and a half long beginners’ class but Mark had other plans.  He decided that we didn’t need to use the poles.  He said if we can learn how to ski without poles, then we will be experts with poles.  Apparently no one told Mark that I had no intention of becoming an expert; I simply wanted to survive.  Regardless, Mark had us climb up a small hill (the “bunny hill” as I have since learned) and ski down.  We practiced skiing straight, slowing down, and turning.  This was all fine and dandy.  The hard part was getting up that hill!  Imagine your feet are in casts that go up mid-calf and those casts are attached to 6-foot sticks.  You can’t straighten your legs because it will hurt your ankles so you are in a permanent semi-squat. Then someone tells you to walk up a hill at an angle using a side shuffle situation. If you don’t keep your immobilized feet perfectly parallel, you will slide back down the mountain.  Now do that for two hours.  That is ski school.

Me and the Bestie skiing on El Colorado in Chile

Our rigorous practice finally ended and we were let loose on the slopes.  The trail was 1050 meters (3150 feet) long and was an absolute blast!  I totally crashed into someone on my way down.  Apparently my legs were exhausted and I could not slow down to save my life.  My victim was really sweet and gave me some tips to control my speed better.  I didn’t quite learn and wound up falling a few more times whenever I felt I was going too fast and couldn’t figure out how to stop.  Mark the Swissman had to come rescue me each and every time.  I figure it was his fault for wearing me out and not giving me poles so I didn’t feel particularly guilty.  We took the ski lift up to the top of the slope (thank God) and I went for another go on the trail.  This time, only one fall!  And I even stopped by myself.  I was so proud.  Thank you, Mark.  You weren’t so bad after all.

My ever-so graceful self

After our award-winning performance on the slopes, we were pretty pooped and just took a minute to enjoy the sights.  The view from the slopes was breathtaking.  We were surrounded by snow-capped mountains resting in perfect peace.  We were above the clouds that hang over Santiago and it was pretty incredible to face how small we are when put against nature.  I loved the clean air of the mountains and brightness that surrounded us.  Perfect.

Trying my hand at this whole skiing thing

Our drivers said they would pick us up at 5 pm at the ski school and, being the overachievers that we tend to be, decided we would figure out for ourselves how to get the rental equipment back to its rightful owners.  Now, we were half asleep when we picked up the rental equipment, which was not in the same place as the ski school.  After a ride on the tram and aimless walking for 30 minutes, we conceded that it was a slight possibility we may not know where we rented the equipment.  So, we ate.  There was a restaurant at the resort that offered a heaping serving of french fries along with a view of what looked like the X Games on snow.  There was some kind of snowboarding and skiing competition going on and we serendipitously had front row seats.  The restaurant got crowded very quickly when competitors showed up for the after party.  We hastily finished our food and headed outside to wait for our drivers.  What was supposed to be a 10-minute wait turned out to be almost an hour, with no real explanation or apology.  The drivers ran into “a problem”.  Either way they took us to the equipment rental center which was, of course, the next building over.  We gave back our  boots and skis and made our way back to Santiago. 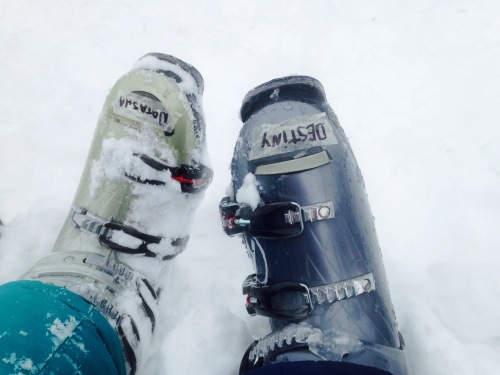 Getting back took about an hour and a half but to get up and down the mountain required traversing switchbacks…almost the entire way.  There were pretty tight turns throughout the trip and the perfect spark for motion sickness. One of our passengers became pretty ill and struggled the whole way back.  After multiple drop-offs, we made it to our apartment around 8:30 pm.  My legs were sore for another two days.  I’m so glad I made myself run some stairs in the weeks before because I’m not sure hamstrings are naturally built for skiing.

One of the things I enjoyed most about the mountain was that it was probably the first place I have visited in Chile where foreigners were the norm.  I definitely felt more a part of the crowd rather than the strange sore thumb.  The diversity was refreshing and welcoming. All things considered, skiing was an absolute adventure and I am so glad I had the opportunity to ski in Chile!