What state is round on two ends and high in the middle? That’s right, Ohio!  After an extremely long day/night in the airport with a redeye flight, I finally made it to the Buckeye State.  I had an awesome friend guide who showed me all the gems of Ohio…especially the ice cream!  If there is a way to ship ice cream from Ohio, PLEASE let me know. 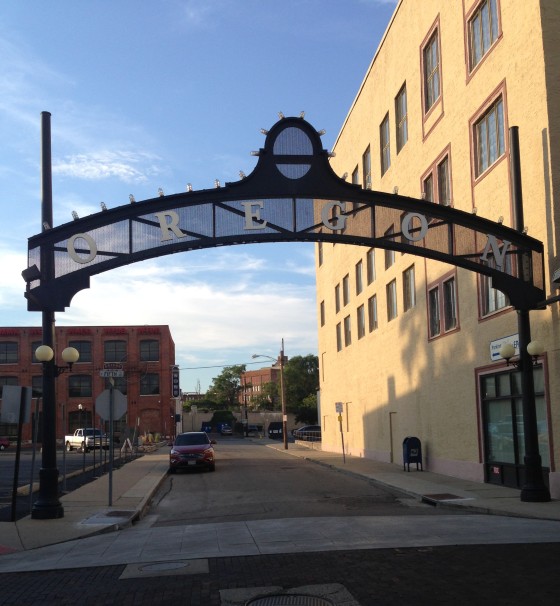 I immediately crashed in a bed upon my arrival to Dayton on that early morning.  After my much-needed super nap, we headed downtown for some delicious food.  Of course it was dinner time by the time I revived myself, so we grabbed an some yummy Thai Nine.  After burgers and eggs for the past two weeks, I had never been so happy to see Thai food.  From there, we headed to the Oregon District, a nice area of downtown with boutiques and restaurants lining the street.  We stumbled upon a used book store that was absolutely awesome.  This place was packed with books from all walks of life and at a great price.  My friend and I could have spent the rest of the night.  But we had more important things to accomplish: we needed ice cream.

Graeter’s, the ice cream shop in Dayton with the BEST chocolate chips.

We bought a few books and headed to Graeter’s ice cream shop.  Graeter’s is known for its chocolate chips and I immediately learned why.  I got a raspberry chocolate chip situation that was divine.  It had chocolate chips that were the size of dimes and they were made of actual, genuine, perfect chocolate.  Well worth the trip!  After indulging our sweet tooth we headed back to my friend’s house and had an early night.

The only picture I took on this day was a half-full martini we grabbed at a happy hour that was a severe disappointment.  So disappointing that I felt posting it would only bring back it’s power to destroy other martinis.  How did we end up with these horrible martinis?  We tried to be cool.  I slept in while my friend went to work and when she got home, we decided to go watch Spy with Melissa McCarthy.  The movie was hilarious and inspired us to be exciting people.  How to invoke excitement you ask?  Find $5 martinis at the local bar!  Big mistake.  We didn’t even finish them.

After our deep sadness and defeat, we had to salvage the evening by getting ice cream.  We headed to Ritter’s for yet another magical ice cream experience.  Ritter’s actually had frozen custard, of which I’ve never been a huge fan.  Ritter’s swiftly changed my mind.  I could eat that every day and be happy with life.

We wrapped up the night as any respectable person should, with Red Box.

No pics from today because we went shopping!!  We trekked over to the Cincinnati Outlet Mall to buy all of the pretty things.  We did some serious damage at Banana Republic and Nine West getting things we didn’t need but absolutely had to have.  What a great time.  We made it back to Dayton in time for me to try the Italian Chipotle-style restaurant, Piada.  Their salads are pretty darn good.  My friend had planned a great cookout for that evening but rain and others’ schedules led to three of us having burgers and lemonade while hanging out.  It was really nice and of course, we capped the evening with another Red Box.  No ice cream today but Piada made it alllllright.

We got up and headed down to Young’s Jersey Farm for home grown burgers and cheese curds.  Yes, cheese curds.  As a non-Midwesterner, this did not necessary sound appetizing to me.  However, I must say I was convinced.  They taste almost like small mozzarella sticks without greasy breading and much better cheese.  At the farm, they had a whole video showing the process of making cheese and cheese curds.  All in all the food was tasty.  We wrapped up our meal with – you guessed it – ice cream.  The must have had 30 flavors of ice cream and 29 of them I had never heard of or tried.  We both had apple dumplings a la mode.  I wanted something a little different so I tried mine with sweet potato ice cream. Delicious!  We walked around a bit and checked out the cows on the farm.

After Young’s we went to the Air Force Museum on Wright-Patterson Air Force Base in Dayton.  The museum has a total of three hangars (and a fourth under construction) with the full history of the Air Force, beginning with the Wright brothers’ work in Dayton and North Carolina.  Part of the base is actually located on their land which was interesting to learn.  We made it through about one quarter of one hangar before leaving – it was huge.  There were models of the first planes along with the history of the first Black military pilot, Eugene Jacques Bullard.  Bullard was born in Georgia in the 1890s and was able to escape to Europe and grew to be a prizefighting boxer and nightclub owner.  He then became an accomplished combat pilot for France in World War I; he tried to join the United States Army Air Service (as it was called then) but was rejected because he was Black.  His story was remarkable; the museum had a case of about 30 different awards Bullard received during his career as a combat pilot.

After leaving the museum, we journeyed back home to finish up leftover brownies and other assorted desserts (no ice cream).   I parted with my dear friend at the airport where I hopped on the flight for the next stop: Minnesota!